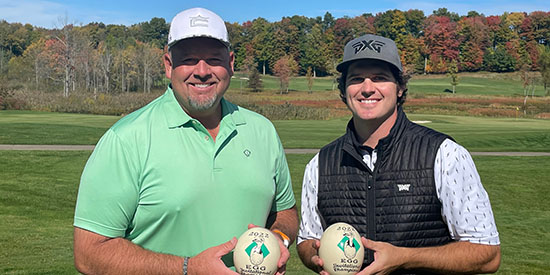 Bolt and Endicott started the day three shots behind the overnight leaders Cliff Bostrom and Vince McDonald, but shot a final-round 67 to complete the comeback.

Bostrom and McDonald grabbed the lead after a first-round 66 in the four-ball format, tied with the team of Steve Putinski and Phil Bojc, who led the field with 8 birdies on the round.

Representing the host club, Okeson and Blechschmidt were five shots back after an opening 71, but got closer after a 69 in the Chapman format. When the 36-hole leaders faded in the final round (again a four-ball format), it became a two-team race.

Bolt and Endicott finished at 10-under 206, one shot clear of Okeson and Blechschmidt. Putinski and Bojc toed for third at 8 under with Dan Arison and Kevin Bove.

Ian Weinberg and Mike McKenna finished fifth at 7 under par, with Bostrom and McDonald finishing tied for sixth.

Jim Krivanek, who won the 2021 Egg Invitational with Vaughn Snyder, partnered with Brian Smith and finished eighth at 4 under. Krivanek and Smith were Egg champions in 2018.

The course defended itself well, with sunny skies and cool breezes allowing greens to get lightning quick.