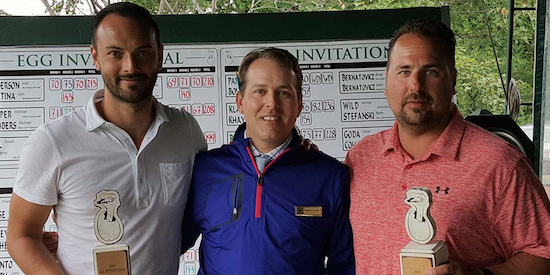 For the second straight year, the champions set a tournament scoring record.

Jim Krivanek of Cleveland and Brian Smith of Amherst paired their great Chapman-format second round with an unsurpassed better ball final round to not only win The Egg Invitational at Sand Ridge, but to do so in a record-setting performance.

Krivanek and Smith posted a 6-under par 66 in Tuesday morning’s better ball finale to hold off all challengers, breaking the previous tournament scoring record, set just last year, by a whopping four shots with a 199 total.

Two of the teams closely chasing the eventual winners also shot a matching 66 on Tuesday: David Hall and Henry Do of Detroit finished in second place for the second consecutive year; and Northeast Ohio Golf locals Jimmy Wild and Ryan Stefanski jumped over a handful of teams to finish in third.

The shot of the week belonged to Mike Haynes of Cliffside Golf Club in Gallipolis, OH who made a hole-in-one on the 144 yard par-3 8th hole. The ace, which cut just over the front left-side bunker, was Haynes’ seventh of his career and netted him a sweep of the entire third round skins pot.

33 two-player teams from clubs all across the country competed in the 2018 event.