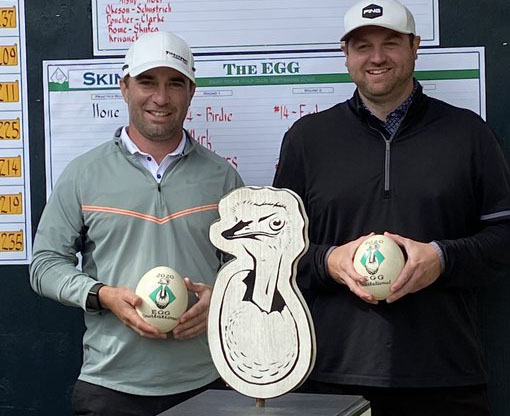 The team of Brett Kaufman and Mackey Miles shot a final-round 68 to cruise to a three-shot win in the 7th Egg Invitational at The Mayfield Sand Ridge Club in Chardon, Ohio. Miles, representing Wizard Golf Club in Myrtle Beach, S.C., and Kaufman, playing out of Firestone Country Club in Akron, Ohio, were the only team in the 34-team field to shoot in the 60s in all three rounds.

On Monday morning, the pair shot a better-ball 69 to sit in fourth place, two shots behind the team of Dan Arison & Kevin Bove, who made seven birdies en route to a 67.

The afternoon round was a Chapman alternate shot, and Kaufman & Miles jumped to the top of the field with a 69 that included five birdies and an eagle in a difficult format. That gave them a one-shot lead over Don Padgett III & Keith Blythe, with 10 teams within five shots of the lead.

In the final round of better-ball, their 68 was again tied for the low round of the day. Their biggest challenge came from 2018 champions Jim Krivanek & Brian Smith, who also shot 68 but couldn’t overcome a 73 in the second round.

Chris Okeson & Rob Schustrich shot rounds of 71-70-70 to finish fourth, while three teams tied for fifth. In all, 11 teams broke par for the tournament.

Arison & Bove fell back with a 75 in round two and ultimately finished tied for 10th.

While many tournaments were forced to cancel this year amid the coronavirus outbreak, others saw record interest, and The Egg Invitational was a case study of the latter. The field filled quickly this year, and grew from 24 teams last year to 34.

Related: As some four-balls cancel, others like The Egg Invite thrive

– There was only one skin in the first round of better-ball play. Mark Akers birdied the 4th hole.

– The more challenging Chapman format didn’t prevent good scoring. Steve Putinski & Phil Bojc made 6 birdies on their way to a 70, and Mike McGuire & Josh Brandon made two eagles on the day. They, along with PJ Malik & Brendan Keating and Kyle Endicott & Matt Jeffries, earned a skin by making an eagle.

– Two skins were awarded on the final best-ball round. Mike Dresser birdied the 4th and Brett Kaufman the 14th.