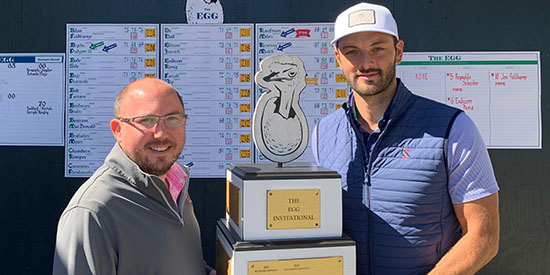 Jim Krivanek and Vaughn Snyder shot rounds of 67-65-67 to win the 8th Egg Invitational at The Mayfield Sand Ridge Club in Chardon, Ohio.

Krivanek and Snyder went bogey-free over the three rounds to win by three shots over Gabe Reynolds and Austin Schreiber. The two teams were tied heading in to the final round but Reynolds and Schreiber could not sustain the momentum of their second-round 63 in the Chapman format (including six straight birdies on the back nine), closing with a best-ball 70.

For Krivanek, it was the second time he has raised the Egg Invitational trophy, having first won in 2018 with partner Brian Smith. Their 199 total set a tournament record, a number matched by Krivanek and his new partner Snyder this year.

The 2020 champions, Brett Kaufman & Mackey Miles, closed with a 66 to pull into solo third out of the 30 teams entered, finishing four shots behind the winners with a 204 total.

Don Padgett III and Keith Blythe finished fourth at 205, five shots back. Jody Roudebush and Erik Martin rounded out the top five at 207.

Jon Feldkamp finished well down the field, but arguably was among the happiest players at Mayfield Sand Ridge, after winning the only skin of the entire tournament on the 10th hole, valued at $1500.